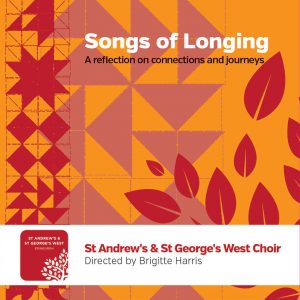 Songs of Longing is the first CD released by St Andrew’s and St George’s West Choir, directed by Brigitte Harris.

It celebrates connections and journeys of songs and people across the world. The CD fuses songs of the Renaissance with African-American traditions and, uniquely, the first indigenous Christian hymn in Malawi.

The CD is available here at St Andrew’s and St George’s West for £6. Proceeds to choir funds.

Here’s one of the tracks as a taster. Enjoy!

This recording of music by the Choir of St Andrew’s and St George’s West Church, Edinburgh brings together the worship of southern Africa, its transformation by the African-American slaves, and the European roots of high church music.  These pieces reflect the connections and journeys of the diverse body of people who congregate here at St Andrew’s and George’s West in Edinburgh – choir and musicians, minister, members of the congregation and of the wider community.

The congregation has taken an interest in the relationship between slavery and song since its minister, Ian Gilmour, travelled to the United States to undertake some study on the topic in 2014.  He was able to interview a number of African Americans who had family connections with the slave era or the Civil Rights movement, when a selection of the 6,000 plus slave songs was revived to strengthen resolve within the black community. These spirituals have left an incredible legacy which can be found in protest songs but also paved the way for Gospel, Blues and Jazz music.  Two of our musicians have written or arranged new compositions using spirituals as source material, and these have been sung at worship as well as in concerts. These are appreciated in the congregation, with one piece winning a popularity poll amongst church members. Thus the faith, emotion, and vigour of spirituals continue to move and inspire people today.

The congregation has a strong relationship with Malawi, through missionary partners, members who have lived and worked there and through a visit by members of the congregation and choir in 2013. This group participated in the bicentenary of David Livingstone, the explorer and missionary who fought vigorously against the slave trade in Africa.

St Andrew’s and St George’s West Church dates from 1784.  Its elliptical Georgian sanctuary offers a clear and resonant acoustic which favours the choral sound.  Singing from upstairs there is a “whispering gallery” effect which adds a particular bloom to the tone.   For this recording the singing takes place in different parts of the sanctuary; for most tracks the singers stand on the dais downstairs, but the full width of the gallery is also used. To demonstrate the acoustic quality of our church sanctuary, two examples of music from the Renaissance repertoire are included.

Sicut cervus – Giovanni Pierluigi da Palestrina and Sanctus – Clemens non Papa In Palestrina’s the motet Sicut cervus (As the deer pants for the water), the contrapuntal lines weave themselves around each other seamlessly and fill the space of the sanctuary.  The setting of the Sanctus by Clemens non Papa is essentially a round in five parts: for this piece the choir sang in the round, resulting in a rich interplay of vocal colour.  Brigitte Harris, Director of Music

Albert’s Hymn The first settled Scottish mission in Malawi – the Livingstonia Mission – entered the country in 1875. In 1881 their first convert, Albert Namalambe, was baptised and at about the same time he composed what can claim to be the first indigenous Christian hymn in Malawi. In the mid-1970s Jack Thompson, now a member of St Andrew’s and St George’s West, found the original words scribbled in pencil on a single sheet of paper in the National Archives of Malawi. Unfortunately no original tune has survived. But in 1975, to help celebrate the centenary of the Mission, the Malawian teacher and musicologist Mtengela Chirwa composed a modern tune for Jack Thompson’s English translation of the Chichewa original. Andrew Carvel’s arrangement is based on this tune. T Jack Thompson, Honorary fellow, University of Edinburgh

Steal Away This arrangement was commissioned by the Rev. Ian Gilmour after he returned from study leave in the USA. The setting contains three spirituals; ‘Steal Away’, which is sung by the main body of the choir and forms the backbone of the piece, “Swing low sweet chariot’, sung by a mezzo soprano soloist, and ‘Deep River’, by a tenor soloist.  The first time each melody is heard, it is the dominant part of the texture; they then appear in various combinations with each other. As the melodies interweave, each of them comes to the fore, most notably in Deep River when the Tenor solo rises out of the texture.  The piece finishes with a final, more poignant statement of ‘Steal Away’.  Andrew Carvel, Assistant Director of Music

By an’ By  This is a fairly raucous setting of the Spiritual of the same name for men’s voices, which incorporates an element of barbershop in order to achieve a lively and joyful setting. The call and response heard in the work moves between all parts, and achieves an almost improvisatory feel, which seeks to represent the origins of the song. Stuart Murray Mitchell

Hamba Nathi Translated as “Walk with us”, this is a traditional song from South Africa written in the Xhosa language. This arrangement is by Anders Nyberg, a Swedish composer and conductor. “Hamba Nathi” was first sung by the choir in honour of the outgoing Head of Christian Aid Scotland, with which organisation the congregation has a strong and long connection. Crispin Longden