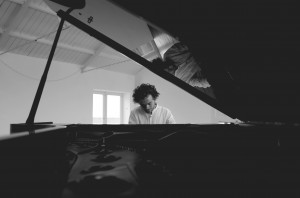 Amongst the hundreds of releases of autumn 2013, a new and unexpected album turned up at ClassicFM, the world’s largest classical radio station. Intrigued, the Managing Editor immediately placed it as “Album of the Week” on ClassicFM Drive. The response was unprecedented. There was a flood of emails and phone-calls after every airing, the album soared into the charts and within a week Decca Records wanted to secure the rights to this beautiful and mysterious music.

Since then, Alexander Chapman Campbell’s debut album for solo piano, “Sketches of Light”, has appeared across radio and TV, featured on several chart-topping compilation albums and continues to enchant listeners around the world.

In March 2016 the 27-year-old composer is releasing his second collection for solo piano, “Portraits of Earth”. His music has been described as “not jazz, not classical, not improvised, but a glimpse of something new…” and his second album only deepens this enigma.

A truly original and magnificent musician: not one to be missed.

“…something quite special.” Keith Bramich, Music and Vision

“Tipped for the top.” Aled Jones, TV and Radio Presenter